In 2008, a deal was signed with Gemini Sun Records as an umbrella label to pass through distribution of Ancient-Future.Com Records as a stand alone label through Ryko/WEA distribution. While that meant that Ancient-Future.Com releases had the potential to achieve the same level of distribution as Ancient Future enjoyed when it was signed to a major label, the economic downturn coupled with free music on the Internet led to a rash of record store closings. The distribution deal ultimately ended after the closing of Gemini Sun Records in 2010.

Return to the Sleeping Lady

After a long absence, the Sleeping Lady beckoned. She was silent for many years, but with the blessing of founder Billy Bramblett in the fall of 2008 (exactly 30 years from the first jam sessions of the original version of the band Ancient Future!), she re-awakened just down the street from her place of last repose in Fairfax, California.

As luck would have it, Teja Gerken, then editor of Acoustic Guitar Magazine, held an acoustic guitar showcase February 11, 2009, at the re-awakened Sleeping Lady, and invited Montfort to perform as part of the showcase to celebrate the release of his first solo guitar recording the previous day. Exactly 30 years to the day after Ancient Future's first public performance at the original Sleeping Lady, Montfort performed his first concert celebrating his first solo recording.

The Sleeping Lady apparently loved a circle completed. After all, it is hard to leave the Ancient Future behind...

The 30th anniversary CD release party at the Freight and Salvage in Berkeley featured Ancient Future, Matthew Montfort, and Mariah Parker's Indo Latin Jazz Ensemble performing music from their three new releases celebrating 30 years of world fusion music. The playlist below showcases the four videos that have been released from the concert.

Finally, Matthew Montfort explains how he created a new raga by applying the principles of Indian raga to the music of Jimi Hendrix in 'Purple Raga' from Seven Serenades for Scalloped Fretboard Guitar.

All three videos are available in high resolution audio to subscribers to The Archive of Future Ancient Recordings.

The Archive of Future Ancient Recordings

During Ancient Future's 30th anniversary year, work began on a new Ancient Future band project: The Archive of Future Ancient Recordings (A.F.A.R.). The concept is to involve fans of world fusion music in supporting the creation of an archive of live and studio recordings that are available to subscribers as they are created before they are released commercially.

To fund A.F.A.R., a subscription system model is being employed. It is a bit like making a "people's label" to fund the recording. A special download supporter area has been unveiled where the work files for the project are posted as they are created. Over 94 minutes of music is in the archive and available to supporters now, with another 50 minutes in production, and more to come as money is raised.

Recording Newsletter Package: $15. Add to Cart. Support Now. Supporters at this level receive the A.F.A.R. Email Newsletter which provides a window on the creative process, good quality 128 kbps digital downloads legacy recordings chosen from the Ancient Future archives of live concerts, radio performances, and unreleased performances, good quality 128 kbps digital downloads of music to be recorded especially for the A.F.A.R. project, and a 30% discount on advance copies of the final commercial release. Until the Download Supporter Package is sold out, you can upgrade from this package at any time for an additional $15 donation (Upgrade Now). Be a virtual fly-on-the-wall during the recording process!

Download Supporter Package: $25. Add to Cart. Support Now. Supporters at this level receive everything included in the Recording Newsletter Package plus high quality 320 kbps downloads of legacy recordings chosen from the Ancient Future archives of live concerts, radio performances, and unreleased performances, high quality 320 kbps digital downloads of music to be recorded especially for the A.F.A.R. project forming an exclusive preview audio recording with digital liner notes (selections from which will form a final public edition), and the chance to submit feedback to questions posed in the recording newsletter. Until the Limited Edition CD Sponsor Package is sold out, you can upgrade from this package at any time for an additional $25 donation (Upgrade Now). Limited to 300 packages.

Limited Edition CD Sponsor Package: $50. Add to Cart. Support Now. Supporters at this level receive everything included in the Download Supporter Package plus CD quality downloads, and when the project is complete, an exclusive limited edition CD-R of the same recording with printed liner notes signed by Ancient Future leader Matthew Montfort (shipping and handling charges apply). Until the Honorary A & R Representative Package is sold out, you can upgrade from this package at any time for an additional $25 donation (Upgrade Now). Limited to 200 packages.

Honorary A & R Representative Package: $75. Add to Cart. Support Now. Supporters at this level receive everything included in the Limited Edition CD Sponsor Package plus 24 bit hi-res audio downloads, and when the project is complete, a DVD-R including video and 24 bit audio files for hi-rez playback on computers (shipping and handling charges apply). This is the perfect package for audiophiles and home studio enthusiasts. Limited to 100 packages.

VIP Donor. Make Tax Deductible Donation. You can also support the project with a tax deductible donation in the amount of your choice through Ancient Future's fiscal sponsorship with InterMusic SF, a 501(c)(3) Non-Profit Organization.

Ancient Future's 35th anniversary year was celebrated by concerts and by the release of the first HD audio/video release in Ancient Future history! Yearning for the Wind is a beautiful video of a scalloped fretboard guitar and tabla duet recorded for The Archive of Future Ancient Recordings. Released as an enhanced CD to promote Ancient Future's fan funded project, the full resolution files were made available as soon as they were recorded to A.F.A.R. supporters. 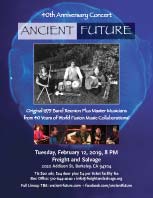 Ancient Future performed its 40th Anniversary Concert at the Freight and Salvage in Berkeley, California, on February 12, 2019, exactly 40 years and 1 day after their first concert, which was Feruary 11, 1979, at the Sleeping Lady Cafe in Fairfax. The concert featured the original 1979 band lineup plus band members from Ancient Future's major label releases along with top master musicians from around the world.

New tracks were recorded for the Archive of Future Ancient Recordings, and tour dates were announced, although dates in 2020 and 2021 were cancelled due to the pandemic.

Gordy Hall was a prominent figure in the music scene of Fairfax, California, which he helped document on video through Gordyo Productions. He was in the midst of editing a major Ancient Future DVD project featuring four different lineups of the group when he was diagnosed with lung cancer. He passed away soon thereafter. His wife, Brilla Hall, arranged a memorial for him on June 28th, 2009 at Peri Park in Fairfax, and many musicians performed in his honor, including Ancient Future leader Matthew Montfort. The Ancient Future DVD was never finished, but some videos from the project have been released on Ancient Future's YouTube channel, including Guitar-Sitar Jugalbandi, Ocean of Love, and El Zaffa. Sadly, Brilla Hall passed away in 2014. She was an astrologer, musician, benefactor, and the artist who created the first cover of Matthew Montfort's book, Ancient Traditions - Future Possibilities.

Randy Mead, who composed for and performed with Ancient Future from 1982 to 1986, died unexpectedly on August 5, 2012, from a massive coronary event in his home near Slocan Lake in Eastern British Columbia. He was widely known as an extraordinary flutist, multi-instrumentalist and recording artist, as well as a film and film-score producer. His work can be heard extensively on Ancient Future's Quiet Fire recording.

On July 18, 2016, original Ancient Future multi-instrumentalist Phil Fong passed away at St. Luke's Hospital in San Francisco after a battle with ALS. He was an amazing musician and one of the most soulful sarod students of Ali Akbar Khan. The amount of emotion in his music was truly remarkable. He was well liked by his Ali Akbar College of Music alumni, and in addition to his work with Ancient Future, he played in a variety of other ensembles, from classical Indian music to punk rock. His work is featured on the first two Ancient Future recordings: Visions of a Peaceful Planet and Natural Rhythms.

This video is an amazing archaeological find: the very first video of Ancient Future, recorded in late 1978, months before Ancient Future's first concert! Thanks to Jonah and Mariposa at Marin Artists International who were able to rescue parts of Ancient Future's first video recording session from archival oblivion during the time that Phil was hospitalized. This short teaser from 'Eternal Embrace' by Phil Fong from Visions of a Peaceful Planet was the first release from this archeological expedition. Performances of two complete pieces featuring Phil and the rest of Ancient Future have been recovered, and are now available on the reunion E-CD edition of Visions of a Peaceful Planet.

Stephen Ashton was a central figure in the musical adventure that led to Natural Rhythms. His brother, Joseph Ashton (AKA Yusef Ali), is a multi-instrumentalist who is featured on the very first video of Ancient Future recorded before their first concert. Stephen was a film producer and invited Matthew Montfort and Mindy Klein to do some work in his four track recording studio at his vineyards in Glen Ellen, California. The studio was right next to a pond filled with Pacific tree frogs that inspired an interspecies jam session. Later, Stephen Ashton was on the plane they took to Hong Kong on their way to Bali, leading to an adventure in China before they ended up recording music with Balinese rice paddy frogs. Sadly, his home and studio were destroyed in the Nuns fire in October 2017, and he passed away of natural causes about six months later. His family is rebuilding Ashton Vineyards and they are producing wine again.

Violinist Bruce Bowers performed and recorded with Ancient Future from 1986 to 1988, appearing on Quiet Fire and Dreamchaser. Bruce Bowers and keyboardist Doug McKeehan came to the attention of Ancient Future leader Matthew Montfort through their group Air Craft, which released it's first LP in 1985. Air Craft went into hiatus when the pair joined Ancient Future in 1986. After a few years of touring with Ancient Future, Bruce Bowers moved to Wisconsin. In 2015, Air Craft reunited for a couple of concerts, and began a second recording project. Sadly, soon thereafter Bruce was diagnosed with a case of severe prostate cancer that went metastatic. Work continued on the Air Craft project as long as Bruce was physically able. Bruce Bowers passed away in March 2020, and in his honor, master violinists Mads Tolling, Matt Szemela, and Ancient Future's own Jim Hurley helped by contributing parts to finish out the album. Bruce Kaphan, who was the engineer for Ancient Future's Dreamchaser and World Without Walls releases, helped finish the project. Divergent Path was released in 2021 on Craftedair Recordings.